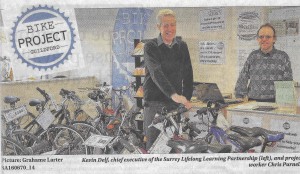 Two years ago, a charity took on a dilapidated video shop and residential flat above to create a social enterprise with the aim of benefiting the community. It became the home of the Guildford Bike Project, a spoke of the Bike Project which, since its launch in May 2012, has sold and serviced more than 2,500 bikes, supported 67 volunteers, trained 54 cycle mechanics and given 61 work experience placements. The hub in Southway was long-unoccupied before the Guildford Bike Project moved in, and with the pro bono support of property consultants Tuffing, Ferraby, Taylor LLP (TFT), the shop was transformed.

Overseen by the Surrey Lifelong Learning Partnership (SLLP), the Bike Project is expanding, and specifically in Guildford is concentrating more on opportunities for people to learn gardening and street cleaning skills through GLADE (Guildford Learning and Development Enterprise). “We lease the premises from Guildford Borough Council (GBC), and we have been working with GBC, Guildford College and TFT.” said Kevin Delf, chief executive of SLLP. “We entered into an agreement to lease the property and the idea was We were all working together, all putting something in, with the idea to create a facility for the community where it would provide an outlet for some of the social enterprise like the Bike Project and GLADE. “It is a place where people come to Volunteer or to engage in learning and volunteer as well.”

At the Southway shop, the front acts as a retail outlet for the bike project, selling bikes which have been donated to the charity and repaired at its base at Woking Road Depot in Guildford. At the back of the shop is a room with computers where courses are held in confidence-building, horticulture, IT and numeracy. Another challenge faced by the Surrey Lifelong Learning Partnership and TFT was the garden at the back of the shop, which was a concrete wasteland that now has areas of grass which can be used for practical experience for the horticultural course or servicing bikes. “Kevin had never done a building project, so they needed somebody who could help them through the mire of all of that and deal with all the process that we need to get to,” said Robert Bruce, a partnerat TFT. “We were willing to give some time to do this and we have Worked for other charities “Buildings are always a challenge, whether a massive building in London that I have had to deal with over time, or whether it is a project like this. “They are all unique. All have their challenges and it is a question of putting it all together.” GLADE, works in partnership with GBC, Oakleaf Enterprise, and Downslink YMCA, and aims to help people back into employment. “Essentially what we are doing is delivering gardening services and street cleaning services in Stoke and Westborough on behalf of the council,” Mr Delf said.  “We are trying to provide opportunities for local volunteers and local people to work and try to develop alongside that skills and training.”

The bike project also has an outlet in Dartmouth Avenue, Sheerwater, and is expanding to Walton-on-Thames.
The focus lies in Walton for now, but Mr Delph said there could be further opportunities to expand the Bike Project in Surrey.
He has asked the residents of Elmbridge to donate bikes for the new shop, or volunteer their time to help.
“We are always looking for people who are interested in cycling and improving health and learning, who would like to sponsor any aspect of our work,” Mr Delf said.